The Printup Home - Room by Room     - You are too late here: this is what we like to do when we can find it. 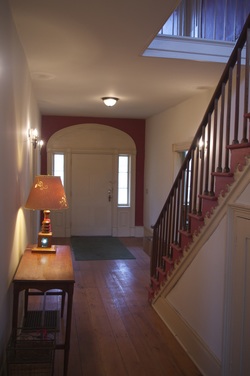 When you enter the brick part from under the curved-roof porches from either door, you come into a huge formal hall with stairs leading to the second floor. To the east is a ~20x30’ 2 section living room, with a hand-hewn beam ceiling, Red Fir floors, and a fireplace. To the west is the formal dining room (or use it as a library) with a mock fireplace, a 1/2 bath, and also a large custom-built eat-in gourmet kitchen. It is fully applianced,  everything new, everything high end. Upstairs, the huge hall continues and there is a “small” bedroom (12.5x18’)  and two larger ones (each 17.5x18.5’), one with a mock fireplace and one with a real Rumsford fireplace with its original cover. A former fourth bedroom was turned into the pink marble bath and laundry facilities.

The wooden part (which is vinyl sided) is smaller and more conventional. It may be the oldest portion of the home.  It also has two doors, which enter from both a porch and a deck. Downstairs, there is a room recently used as a kitchen/dining room and a second room which had been used as a living room, plus a full bath. A stairway leads to 2 bedrooms above them (each 12x19’) which have cherry flooring. All rooms here (but the kitchen) have wood floors and crown molding. You can move between the brick and wooden sections of the home on both floors by doorways on each floor, ones which could be easily be closed off and locked. 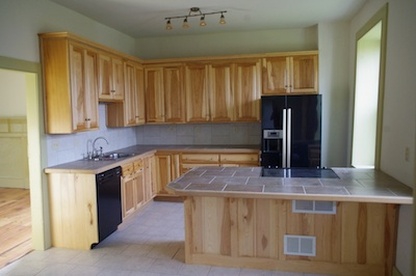 The Neat Old Features:
1) The home once had 4 fireplaces. Today, 2 are mock and the other two are original Rumford Fireplaces, which could be used if triple wall SS pipe were installed in the chimney.  Count Rumford wrote in 1796 about physicist Benjamin Thompson's  invention which narrowed the flue to increase draft and angled the sides to radiate more heat, resulting in a design that was considered state of the art until about 1850. Not only were these fireplaces more efficient, but they were virtually smoke-free. They are only rarely found in the  US, and we have two of them! One fireplace still has the original decorative cover, which would have been installed during the warmer months. These covers are rarely found and, if found, never seem to be intact. All, that is, except for this one.
2) The bricks are installed in a very old pattern with every other brick at right angles. I am told this was an expensive way to build, even back then. A brick water ledge is also employed.
3) Arched bricks are over the windows.
4) The brick walls are from 16-24” thick.
5) All beams are hand-hewn and are pegged together. They are exposed in the living room. Additionally, the home is held together by a series of 1” steel threaded roads installed in multiple strategic places and spanning from one side to the other, yet hidden from sight. All are original.
6) Ceilings in the brick portion are 11’ upstairs and 10’4” and higher on the first floor of the brick  portion of the home, 8' in the smaller wooden part.
7) Hallways are 8.5’ wide, feeling almost like long rooms. Quite impressive when you enter them.
8) Much of the woodwork is ornate for a Colonial, some in styles which are unique to this home.
9) In the eastern wing (which is probably equally old) is an area with 4 faux-painted doors and other woodwork. Very neat stuff to see.
10) A full walk-up attic features rare oval windows. We have found only 2 other homes in the county which have these. Here you can see that there were once 4 chimneys which served the home. They ran through the bricks in the walls, not along them, then slanted toward the center so they could exit nearer to the peak of the roof. In the attic, the wooden-pegged post and beam construction is easily seen.
11) Full basement w/outside and inside entrances. Very undeveloped. Floors are either crushed stone or cement, with a lesser amount of dirt. They say there were once shackles to hold slaves there, but we have not found them. (See notes under "History".)
12) 4300+ sq. ft. of living space. Because of the high ceilings, the cubic footage roughly equals that of a 5500 ft2 modern home. People walk in and are amazed at how large it is. It just does not look that large from the road.
13) Closets in each bedroom. They are double-deckers in the the main portion of the home. There is a large wardrobe which serves as a downstairs coat closet. There is a huge linen closet in the upstairs bath, with a sliding ladder to reach it. Ten closets total (13, if you count the double-deckers as 2).
14)  Precisely cut limestone foundation with two stone interior walls, all mortar-filled between the blocks. One low room in the basement had been plastered, probably for cleanliness in cheese production.
15) 99%+ original brick, in very good condition for its age.
16) Long-lasting metal roofs, recently recoated.
17) Huge rooms. There are no small rooms. Nearly all of them have ceiling fans and lights, along with large windows. The ceiling fans make it easier to heat, keeping the warm air where you are, instead of near the ceiling.
18) Spectacular refinished pumpkin plank flooring in 6 areas. Refinished Red Fir, which looks just as nice, in 5 other areas.
19) 24 replacement windows, mostly quite large. All have tip-in cleaning and all but 5 are doubled-paned glass. Most are 6/6 design to match the remaining original windows.
20) 3 covered porches and a deck with period railings. Two of these have unique curved roofs with a medullary sun-ray design  under each roof. This design mimics that found above the second story windows which are directly over each porch.
21) >95% original woodwork and <5% replica, some fairly elaborate for a home of this era. We'll bet you cannot tell which is which.
22) A series of 8 adjustable steel rods go through the house at various critical points and serve to strengthen it and keep it from spreading. We can see their ends on the outside, one of which uses a gear as a giant washer. Inside the home, except for the attic, the rods are hidden, quietly doing their work. 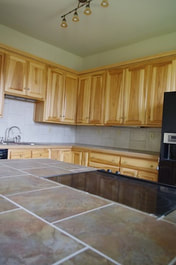 In the kitchen are ceramlc tile countertops, floor and backsplash + high end appliances. Custom hickory cabinetry, all solid wood, no fake wood with a skin over it. 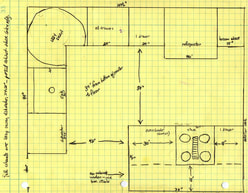 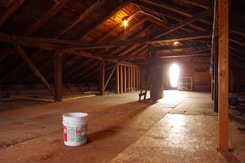