SOLD - you are too late: Vinyard's Choice - The Printup Home 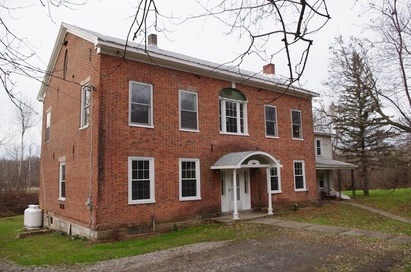 Both grand and gracious, The Printup Home was named for the family who built it in 1829. This brick Colonial has been a well-known Montgomery County landmark for generations. The Printups started as illiterate translators of Indian tongues for Sir William Johnson and ended with multiple homes and huge land holdings. This was their finest and was built as part home, part tavern/hotel during the early days of the Erie Canal, which then went within feet of the door. A bridge over the canal was just beyond and its approach now forms the west boundary of the property. Eventually, the Printup family drifted away, to Georgia and Iowa, and their holdings in the County shrank, then disappeared as their business expanded elsewhere. 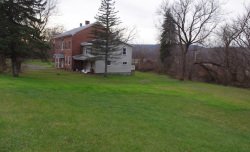 This was a home that had fallen upon relatively hard times, with owners who - fortunately - lacked the means to “modernize” it (ie - screw it up). Previous owners had shown an appreciation for what they had and taken some care to keep it original. And original is just the way we found it 2 years ago, in what we call “museum quality condition”, meaning nearly everything old was left in place and undisturbed. We found 95% of the woodwork was intact and even most of the plaster, which while not always perfectly smooth, needed little or no repair. The original doors were even there and most of the plank floors had never been covered. That is not to say it could have been lived in then. It needed tons of work but was, shall we say, a “worthy project”. And for the next 18 months, it became a full-time project for our very talented carpenter, Lee Sanders, along with a series of specialty contractors, as well as ourselves. You will find many premium old features here, some of which are unique to this home.

The Printup Home could be easily used as a home-based professional office or a B&B. It’s location and style lends itself well to this. Or there could be an in-law or caretaker apartment, coupled with gracious living for the owners in the brick part of the home. Or use it as it was built, a large and obviously grand home used by one family.

Check out the sub pages for tons of photos, a lengthier description, and further details.