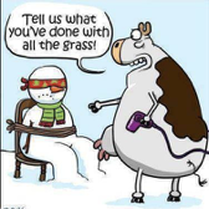 Mother Supreme was on her deathbed. The doctor told the nuns to give her warm milk and hope for the best. But she wouldn’t even try to drink it. So, thinking fast because her time wasn’t long, the nuns added a little Old Grandad to it, and she took a sip. Encouraged, they added more. She drank it. They gave her more and she began to rally. A fourth, generous, helping and she could even talk a bit. Hoping for some words of sage advice before she died, they asked her if she could tell them something that would help them after she was gone. She quickly said, "You know, that cow - don’t sell it!”

I was milking one afternoon and saw a fly crawl in Betsy's left ear. It disappeared from sight. I kept milking and, just before she was empty, out popped that darn fly, right into the pail. It was in one ear and out the udder. 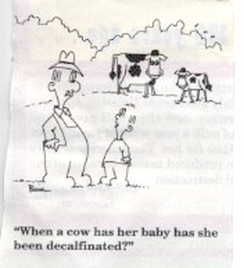 ​    Amy, a blonde city girl,  marries a Wisconsin dairyman.   One morning, on his way out to check on the cows, the rancher says to Amy,  "The breeder is coming over to breed one of our cows today. I  drove a nail into the beam just above the cow's stall in the barn. You  show him where the cow is when he gets here, OK?"   So then the rancher leaves for the fields. After a while, the  AI man arrives and knocks on the front door. Amy takes  him down to the barn. They walk along the row of cows and when she sees the  nail, she tells him, "This is the one...right here."  Terribly impressed by what he  seemed to think just might be another ditzy blonde, the man asks, "Tell me  lady, how did you know this is the cow to be bred?"  "That's simple. By the nail over  its stall." Amy explains very confidently. Then the man asks, "What's the  nail for?"   She  turns and walks away, and with complete confidence, says, "I guess it's to hang your pants on." 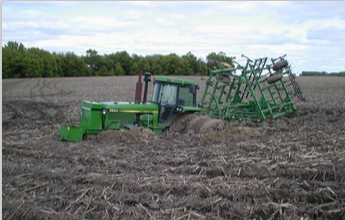 A rancher needs a bull to service his cows so borrows the money from the bank. The banker who lent the money comes by a week later to see how his investment is doing. The farmer complains that the bull just eats grass and won't even look at the cows. The banker suggests that a veterinarian have a look at the bull. The next week the banker returns to see if the vet helped. The farmer looks very pleased: "The bull has serviced all my cows, broke through the fence, and has serviced all of my neighbor's cows." "Wow," says the banker. "What did the vet do to that bull?" "Just gave him some pills," replied the farmer. "What kind of pills?" asked the banker. I don't know," said the farmer. "But they sort of taste like chocolate."
​
​    When we were looking to buy property, I had this over zealous realtor show us what can only be described as a totally worn-out old farm. I mean the land had just been worked to death. The weeds on the property were hardly even growing. The smiling super salesman said, "Now really, all this land needs is a little water, a nice cool breeze and some good people." I replied, "Yeah, I agree. But, couldn't the same be said of Hell?"
Q: When is a farmer like a magician?                          A: When he turns his cow to pasture.
Q: What do you call cattle with a sense of humor?    A: Laughing stock.
A bum steer is a worthless bull.                                     Ground beef is a cow sitting down.
​
The old guy wasn't about to change his farming ways. He told the banker, "Don't you tell me how to farm. I've already worn out 3 farms and I know what's best."
​
One day a traveling salesman stopped by the old Johnson farm in Heartland, Kansas. The man knocked, and Johnson's wife, Fannie, came to the door. "Is your husband home, Ma'am?" the salesman asked. Fannie replied, "Sure is. He's over to the cow barn." "Well, I've got something to show him, Ma'am. Will I have any difficulty finding him?" asked the salesman. The farmer's wife replied, "Nope. You shouldn't have any difficulties. He's the one with the beard and mustache." 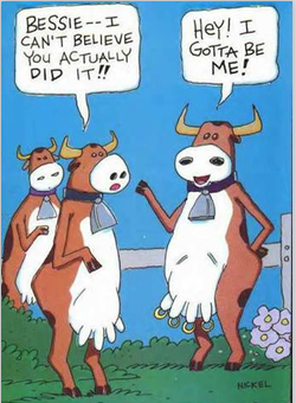 Ole is a farmer in Minnesota . He is in need of a new milk cow and hears about a nice one for sale over in Nordakota (that would be North Dakota for you non-Scandahoovians out there). He drives to Nordakota, finds the farm and looks at the cow.  He reaches under to see if the cow gives milk. When he grabs a teat and pulls...the cow farts. Surprised, Ole looks at the farmer who's selling the cow, then reaches under to try again. He grabs another teat, pulls, and the cow farts again.  Milk does come out however, so after some discussion with the cow's current owner,  Ole decides to buy the cow. When he gets back to Minnesota , he calls over his neighbor, Sven, and says, 'Hey, Sven, come and look at dis ere new cow I yust bought. Pull her teat, and see vat happens.' Sven reaches under, pulls the teat...the cow farts. Sven looks at Ole and says, 'You bought dis here cow in Nordakota, didn't yah?' Ole is very surprised since he hadn't told Sven about his trip.  Ole replies, 'Yah, dats right. But how did yah know?' Sven says, 'My wife is from Nordakota.” 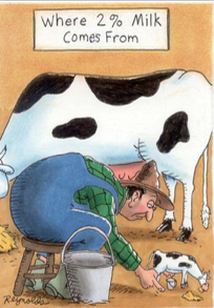 The Montana   Department of Employment, Division of Labor Standards claimed a small rancher  was not paying proper wages to his help and sent an agent out to investigate him. GOV'T AGENT: "I need a list of your employees and how much you pay  them." RANCHER: "Well, there's my hired hand who's been with me for 3 years. I pay him $200 a week plus free room and board.  Then there's the mentally challenged guy. He works about 18 hours  every day and does about 90% of all the work around here. He makes about $10 per week, pays his own  room and board, and I buy him a bottle of bourbon every Saturday night so he can cope with life. He also sleeps with my wife occasionally." GOV'T AGENT: "That's the guy I want to talk to - the mentally challenged one." RANCHER: "That would be me." 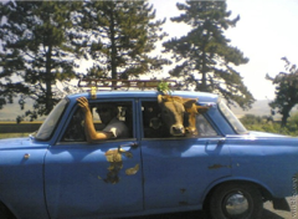 A little lady from Wisconsin had worked in and around family dairy farms since she was old enough to walk... with hours of hard work and little compensation. When canned Carnation Milk became available in grocery stores (1940's) she read an advertisement offering $5,000 for the best slogan for a rhyme beginning with "Carnation Milk is best of all....".   She thought, I know all about milk and dairy farms. I can do this!   She sent in her entry and about a week later, a black limo drove up in front of her house. A man got out and said, "Carnation LOVED your entry so much, we are here to award you $1000, even though we will not be able to use it". Here is her entry:
Carnation milk is best of all,
No tits to pull, no shit to haul
No buckets to wash, no hay to pitch,
Just poke a hole in the son-of-a-bitch. 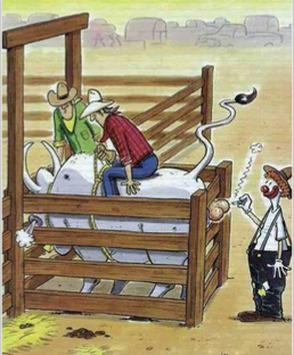 Three bulls were sunning themselves at the top of the hill. The littleist bull says, "I hear they are getting a new bull here."  The others were incredulous. He went on, "And I hear he is bigger and randier than any of us."  The biggest bull said, "Well there's only 100 cows here and I get to service 50 of them. I worked long and hard for that and I am not going to share any."  The middle-sized bull said, "Yeah; I only have 35 and" (looking intently at the biggest bull) " I want more than that." The little bull, encouraged, "And I only have 15 cows; that's hardly any. I need more practice if I am going to grow."
About this time the ranch pickup pulled up towing a stock trailer. It was shaking from side to side and there was this terrible noise coming from it. Two men got out and opened the doors at the back, running to the other side of the fence for safety. Out backed the biggest, blackest bull anyone had ever seen, bellering, blowing snot out of both sides at once. The cowboys on the other side of the fence ducked or they would have been soaked. He was pawing up dust 50 feet into the air. The ground in front of him was lit up by the evil in his eyes.
The big bull looked at this and said, quietly, "You know, I've been bulling around for a long while now and I am starting to get a bit tired of it. I'd like to be a good neighbor. He can have 25 of my cows." The middle bull knew just what was going through his mind, and he said, "That's a good idea. He can have half of mine too." They looked over to the little bull, who was squeaking away, dribbling snot and getting his knees dirty with the dust he trying to raise. "You little fool", they said, "He'll eat you for breakfast. You better give him some of your cows." The little fellow replied, "Oh, he can have all of my cows. I just want him to know I'm a bull."